From Scratch to 1.6million PPE aprons per week

You Are Currently Here:Home > In The Press > From Scratch to 1.6million PPE aprons per week 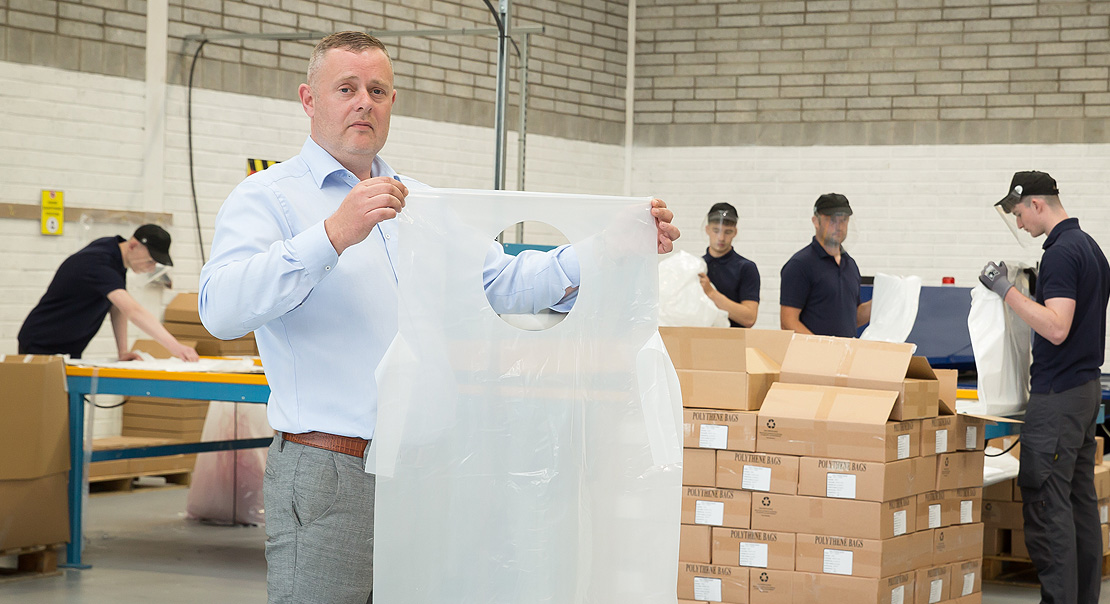 An entrepreneur’s moment of inspiration has seen his packaging distribution firm go from a standing start to producing 1.6 million vital PPE aprons a week for healthcare and key workers.

Sean O’Carroll figured out an unconventional method of producing the vital aprons which protect gowns worn by medical staff, which were previously air freighted from China.

His hunch that corrugated paper cutting machines could be used to manufacture higher quality aprons for a cheaper cost in Ireland has instantly paid off.
As a result, his company IPS Packaging are working flat out on a seven-day basis to produce the disposable and recyclable aprons for the medical and other sectors.

“In the early days of the lockdown we got a request to supply a suite of products, three of which sat into our company nicely, but the fourth was PPE disposable aprons which no-one was manufacturing in Ireland at the time,” said Mr O’Carroll, who founded Limerick-based IPS 20 years ago.

“They were desperately needed and had to be airfreighted in from China, at a premium cost, but in many cases were being sourced at a general thickness below recommended levels.

“Being in packaging, I thought that we could probably make these at a higher quality and for a lower cost in Ireland if we figured out how to do it efficiently.
“We were non-manufacturing packaging distributors, but we dealt a lot with white, polyethylene virgin grade which is the same material used to make standard shopping bags is thicker that what was being used, and is recyclable.

“I realised that the aprons could be manufactured if we used machines specifically designed for the corrugated paper industry – and that no-one had used them for that purpose as they are such a low value item.

“I always wanted to go into manufacturing and when you don’t get long enough to think about something, you make a decision pretty quickly.

“We bought in three large machines and got our operating procedures and health and safety and insurance in place and started manufacturing.

“We also contracted one or two older companies who had similar machines but didn’t have work due to the Covid-19 restrictions.

“It has really worked – in the past six weeks our sales are up four-fold and we have gone from nine staff to 19 with another 16 people indirectly employed because of our new manufacturing process.

“We also have the potential to move from 1.6 million units to 2.3 million per week if we put an evening shift on, which we may do as we are operating on a seven-day basis.

“It has been an instant success with customers, and we are heavily supplying the medical, food and hair and beauty industries, with a lot of interest from salon suppliers who will need this equipment to re-open.

“These products need to be a thickness between 16 and 18 microns to work but the quality of some of the products from China was 11 to 12 microns.

“We are making a quality apron at a 25-micron thickness which has no lead time and is cheaper than the imported PPE.

Our customers trust in our expertise to deliver exceptional service and value-added packaging solutions.

We are very proud of our customer service standards.